I wrote last week in a newsletter (if you haven’t signed up yet, why on earth not? HERE it is, and HERE is how to get signed up) about the pitfalls of SOS (Shiny Object Syndrome) and the especially challenging areas that need to be successfully navigated in order to fully recover.

It got me thinking about the times when I’ve managed it and so I thought I’d share my experiences with you.

To recap, the three trigger points for those of us who suffer from SOS are: –

So I was about 15 months postnatal after having my second baby before I decided that enough was really enough and I needed to get my health and fitness under some kind of control.  My eureka moment didn’t happen in true Archimedes fashion in the bath, but rather in the swimming pool, when just before Christmas my then husband suggested I go to my fancy gym which had not been blessed with my presence for quite some time, child-free!  He said I should go for a swim, take a book and sit and have lunch in blissful solitude.  I packed my book and my bathers and quite literally sprinted for the door.

In the pool I felt simply amazing.  Amazingly unfit.  I felt better an hour or so later drinking coffee and have a solo date lunch, but in that magic 60 minutes I had resolved to get back in the pool regularly.  I used to be a pretty decent swimmer (by English standards anyway) and it had always been my go-to exercise of choice.  In my mid-20’s I even competed a couple of long distance swims where I finished respectfully in the top 15 and even completed in the London Triathlon in 2000.

The decision was made and from that point onwards I literally have not looked back – setbacks and hurdles have come and gone but to give you some idea, about six and a half years ago I looked like this: 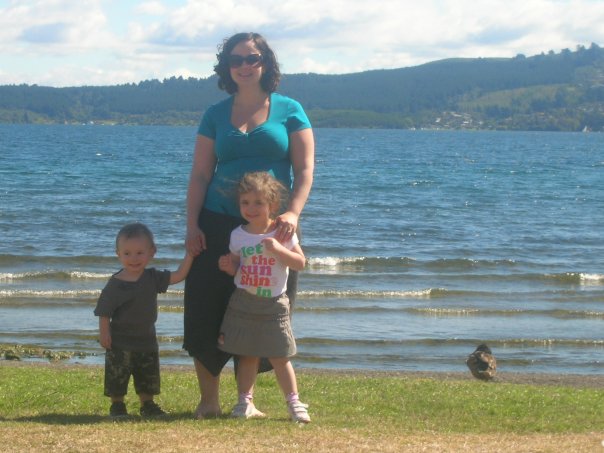 I’d spent plenty long enough considering my options and knew that my mind was made up  – I just needed to make it happen.  I went home and successfully negotiated three mornings a week where I promised to be gone in the dark and back again in the dark before anyone who even know I’d been gone.  Trust me, there were moments when with two very little people in the house and many a broken night’s sleep I really didn’t feel like going, but go I did.

Soon I was hooked and was at the pool almost every morning before it opened and I even started jogging once the most brutal parts of the English winter were done – that is until I suffered a stress fracture in my right foot.  Setback number one of quite a few.  The second came about six months later when we went on a big overseas trip to check out our soon to be new home of Melbourne and visit our family in New Zealand.  The long holiday, with plenty of food, drink and not a lot of swimming was fun but I didn’t lose track of my focus and was back on the bandwagon as soon as we came home.  I even joined a Saturday morning group (squad would be too grand a term) but the sessions were structured and we even did the odd 400m time trial.  I was getting quicker and better and was faster than anyone else that I was swimming with at the time.

But this was England.  My biggest challenges came when our move to Australia happened in August 2010.  Now because I had made so much progress, I’d been at it for almost 10 months and I really wasn’t prepared to give it up, but I was really anxious about how to go about it in Melbourne.  So I did my research and even contacted a couple of Masters Swimming clubs and organised trials for when we landed.

I cannot tell you how nervous I was rocking up to my first session with the Doncaster Dolphins on a Thursday night session back in September 2010.  Australian swimmers were bound to be so much better than me – they were born swimming weren’t they?  I was very unused to squad training – they train for 1.5 hours and cover between 2.5 and 4kms in a session, in a 50m outdoor pool AND they cover all four strokes.  I’m pretty much a freestyle specialist and hadn’t swum butterfly, backstroke or breaststroke properly since school!

That first session was quite possibly one of the most challenging workouts I’ve ever done.  I was utterly broken at the end and even worse, I’d made a terrible mess of swimming backstroke in an outdoor pool in the dark.  I came away with black and blue triceps from crashing into the lane ropes and other swimmers!  Pitiful and laughable all at the same time.  I can remember driving home exhausted, completely spent and relieved but at the same time already dreading the thought of fronting up on Saturday morning to do it all over again.

Believe me when I say that I embraced a whole world of suck by turning up again three days later.

But I have never looked back. 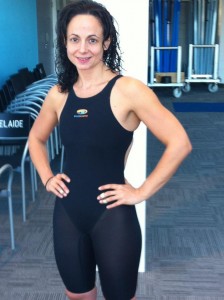 I still have the email that I send to the news members contact – Alan Gibson – back in September 2010 when I said that I could swim 400m in 6:18 and 800m in 12:16.  After a couple of years training with the Dolphins my times were down to 5:12 for a 400m and 10:34 for an 800m.  A pretty enormous improvement.  I’ve won gold medals at Nationals, I’ve held Victorian State Records and competed in the Great Victorian Swim Series in the ocean.

But its not all been straightforward.  In fact I haven’t trained properly with the squad for about 15 months now following bilateral hips surgeries in December 2014.  I also broke a bone in my right foot mere weeks after that first training session – just when I was starting to get the hang of it!

You see how many times I could have just hung up my bathers and given up?  And that doesn’t even cover the disappointments following bad races where I didn’t swim as well as I’d have liked.  The times when squad sessions were so brutal I cried into my goggles.  The mornings that are so cold and dark and yet still I trained.

Embracing the suck is part and parcel of life and living a full, varied and colourful life at that.  Anything worth doing is going to cost you a bit of something, probably quite a lot of somethings – sweat, tears, time, heartache – but it also pays you back richly.  Achieving and succeeding is a great and addictive feeling. 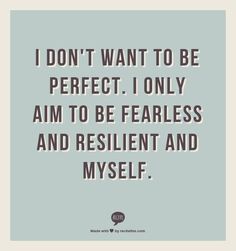 I want my children to know a mummy who has dreams and loves to win and succeed, who picks herself up after setbacks and gets on with it.  I don’t shelter them from the tough bits – they need to know life isn’t always an easy ride and that hard work and dedication result in awesomely fulfilling rewards.  I want them to learn resilience through me, because that’s what they’re going to need in life.  To smile through the gritted teeth, to be dedicated and positive in the face of adversity.

To focus on the rainbows and not the rain.

To embrace the suck, because sometimes it just does.