I’ve been promising a blog on this for so long not I’ve almost given up being able to get it written.  And the reason it’s been extra hard is because I’ve just got TOO MUCH to say on the subject!  I want to look at it from a whole bunch of different angles and there’s a lot I want to draw on. 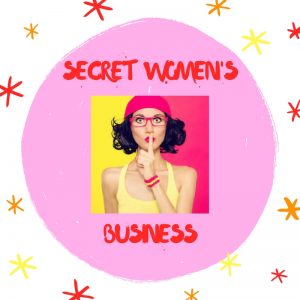 As you know if you follow me online in any format, or work with me face to face in anyway, I tell a lot of stories.  And I tell stories because they’re my way of connecting with you, and for me personally stories are a great way to teach, illustrate a point, learn, be enriched, share and normally laugh (though crying is also a possibility)

So I decided that they best way I could do a deep-dive into this HUGE topic is to break it up into manageable nuggets of words – and what better way than to start you off than with a story, which not only perfectly sets the scene, but will hopefully make it’s own statement about why I don’t think that ‘secret women’s business’ should be kept between us girls. (Disclaimer: later in this little series (part three) I will explain that actually I think us women-folk are pretty shit with handling some of this stuff, and why we really need to own it better.  Not just for the sake of our sisterhood, but almost more importantly to set the next generation of sisters up with a worthy legacy.)  But I digress.

Let me tell you a story.

Last year – Friday 2nd September to be precise – Andrew and I set off on one of our more ambitious adventures.  A road trip with a purpose, from Melbourne to Port Douglas (Far North Queensland) in as short a time as sensibly possible.  In the process of what was then our forthcoming creation of #bradybunchtowers we were aware that we would double-up (at least) on a few big ticket household items.  As it turned out, we collectively had five fridges, 4 freezers and 3 dining tables – you see my point.  Anyway, after doing a spot of research we figured we could get a lot of it up to our holiday home in Port in a very reliable Hyundai imax in less than 48 hours if we didn’t really stop for anything other than wee’s coffee and fuel.

We shared the driving.  Ok, I did about 40% to Andrew’s 60% and he did manage the epic overnight shift through some shocking storms through the bottom half of Queensland.  For the most part it was a brilliant, fun way to travel.  We had great tunes and drank a lot of very shit coffee, we learned lots about each other and slept very little. 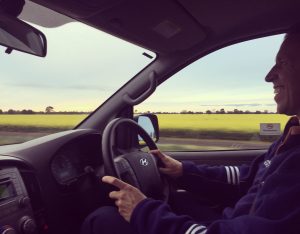 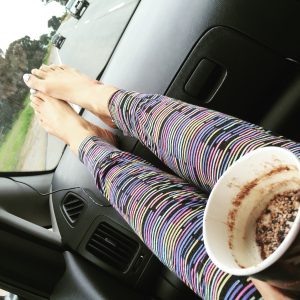 If anyone asks me about that road trip now, I have one overreaching memory that pretty much obliterates all others.

“The pregnancy scare and emergency stop off in a small country town in rural Queensland called Bowen on Saturday afternoon so that I could pee on a stick.”

That was about 30 hours into our trip.  And this is how it played out.

On a couple of occasions during our first day on the road I’d become aware that my breasts were unusually sore and tender and at some point flippantly remarked to Andrew,

“If I didn’t know any better I would think I was pregnant my boobs are so sore!”

He calmly replied, “But you can’t be can you babe.” (Not a question)

I confirmed, with a slight questioning inflection, “No, I can’t be can I babe?”

After a couple of very quiet moments I asked him, “When did you have your vasectomy?”

He intelligently replied, “After Imogen was born.”

(No shit Sherlock.  Couldn’t really have been BEFORE the birth of your youngest child.)

Once I’d clarified exactly (kind of) when the snip had taken place, and of course sympathised with the associated swelling, trauma and distressed it caused the to the surrounding delicate area, I thought it wise to clarify something.

“And you went back for the follow up ‘wank-in-a-cup’ didn’t you babe?”

” You know, when you go back, wank into a cup and they test it to make sure the snip really did snip and you don’t have any live swimmers capable of making more babies at some random point in the future.”

Turns out he didn’t know what I was talking about and never did have any such follow up appointment, or at least has absolutely ZERO memory of it. 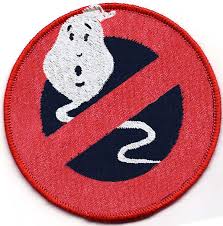 Now the countryside in rural Queensland was suddenly incredibly fascinating and I remember this quiet settling on our trusty imax as we both let that new bit of information sink in.

Let me just say that we’d been together for over a year at this point, and had had a fair amount of sex in that time so the very knowledgeable and rational side of my brain knew that in all probability even if he did have live swimmers (which was in itself highly unlikely), we probably would have been forced to cross this particular bridge somewhat earlier in our relationship.

However, having spent the best part of 36 hours in the new very claustrophobic-feeling Hyundai with Andrew, with very little of what could be described as quality sleep, I was thinking less than rationally.

In fact at this point I was already fiercely protecting my unborn child, contemplating how on earth our other five children would react and where our new baby would fit into #bradybunchtowers.

No doubt similar thoughts were racing through Andrew’s head as he then asked,

“So um, how many periods do you have to have missed before you know that you’re pregnant?”

I thought he just asked, “how many periods do you have to miss, before you know you’re pregnant?”

Did he actually ask that?

This man, who has fathered three children, was almost 47 years old and clearly knew what to do with a penis, even if he apparently didn’t seem to know very much else.

Some of you know that Andrew has the tendency to be a little bit awkward around a lot of what I talk very openly about, and on a very regular basis.  Whilst he’s getting better at throwing in the odd ‘vagina’ and ‘vulva’ into conversation, he’s still not at all comfortable with periods (more of that in part three).  So, my first instinct was actually, “Wow!  He’s just said the work period without giggling!”  But that was very closely followed by the overwhelming desire to grab the steering wheel and drive us into the nearest gum tree or stray kangaroo.  Anything that would knock some sense into this fool.

How could he not know this?!

Turns out, it’s not all that uncommon.  First off, sex-education is done (where it is done) in single-gender classes and the boys focus on boys stuff like wet dreams.  Back in the UK when Andrew would have squirmed his way through it, I dread to think what was covered, but I am thinking it probably involved bananas and condoms. 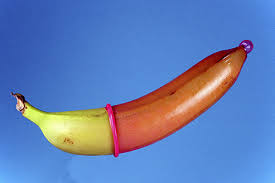 Why would he know about the menstrual cycle in detail?  I mean Mark (my children’s Dad) didn’t have a hope of not knowing about it, but that’s because of me.  I’m quite sure he didn’t have a clue before I came along.  If you don’t have to struggle to fall pregnant, and your partner isn’t the sharing type, or considers it ‘secret women’s business’, why would a grown up man know about this stuff?

Well he does now.  Trust me when I say he got the full and detailed version.  Though it did start a bit like this,

“Once a month there’s this little egg that’s released from it’s home called a fallopian tube, and while that lovely little egg makes it’s way to the uterus there’s the lovely bed being made for it.  It’s all soft and squashy and comfy for the egg to snuggle into… 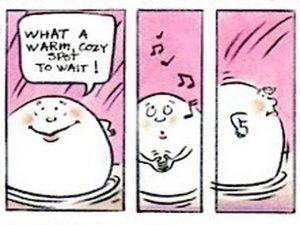 And I’m sorry, but the more I think about it, the more I think that there aren’t any very good reasons why this stuff shouldn’t be part of a man’s knowledge-bank.  In a respectful, general knowledge way.  In a sympathetic, not condescending way.  In a way that says, ‘I understand that women are designed at a biological level to be very cyclical in nature, whilst men are more linear.’

I’m not saying all men need to walk around with a stash of spare tampons for their female friends or partners (though that could be handy), nor necessarily have an in-depth awareness of their cycle (though arguably wise), but surely the biological basics are not too much to ask?

Over the next couple of weeks I’m going to dive even deeper into this subject, but I think that the lack of knowledge, and mis-information that exists in today’s so-called modern day society is staggering.  How can we expect our young and teenage boys to grapple with this stuff in a respectful way if their role-models don’t understand first.  How are the Dad’s out there supposed to have engaging and informative conversations wit their young sons if they aren’t fully clued up themselves?  I’m sorry but ignorance is no excuse.

I want to see an end to the term ‘secret women’s business’.

It’s not served us particularly well up to now.  It has meant that men are at worst lacking in information, and at worst are positively awkward about simple biology.  And let’s be honest, it isn’t exactly rocket science.  And it most certainly isn’t something gross, or disgusting.  There should be no shame attached either.  It’s the way we are made to work and the sooner we can all embrace that, have proper grown-up conversations about it, using proper biological and anatomically correct language without squirming and getting all awkward, the better.