It’s been a little over six months since 3 + 4 = 7 and #bradybunchtowers was birthed in Camberwell.  Blended families aren’t a new phenomenon and I’m quite sure there are literally thousands of people blogging about their experiences, but here’s some of what I’ve learned so far.

I shared a Facebook post before Christmas which generated a fair amount of comment.  (Find the post HERE)  It wasn’t meant as a ‘poor me’ post, and I most definitely wasn’t looking for sympathy, it was more one of these kind of observations:

“F*ck, how come there’s always more work for us women to do, sometimes that really shits me.  Oh, and when you have five children, from two families, that sometimes makes the whole process a lot more complicated”

Well, since that post we’ve had some amazing highs including our first Christmas together, and a trip for all of us back home to England to visit family. 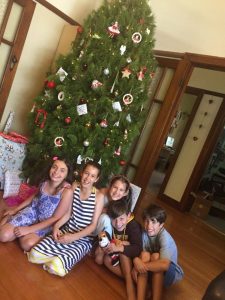 Closely followed by some epic challenges, including Andrew being unemployed for three months, our eldest starting high school, and my two starting another new primary school – plus just all the normal run-of-the-mill moments of sheer exasperation and exhaustion that comes with parenting.  Funnily enough they’re the moments that I don’t have photos for – they’re just not so #instaworthy 😉

Just a reminder, currently we have children aged 8, 9, 10, 11 and 12.  Three girls, two boys.  The boys love football (soccer) and support different clubs (Southampton and Tottenham Hotspur) though thankfully, not arch-rivals. 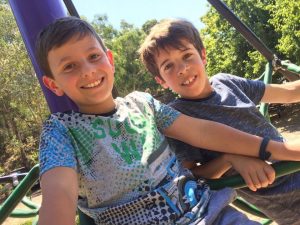 Our two big girls are both almost teenagers which makes for some interesting reactions and interactions.  And our littlest of course just wants to grow up far too fast. 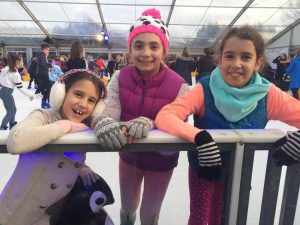 I can honestly say that they are an utterly amazing team and we are blessed that they all like each other, love spending time together and at their best operate as the most united family group. 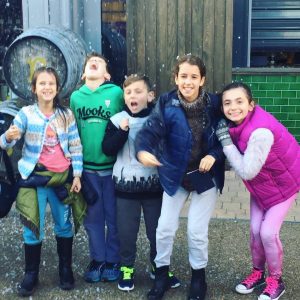 Running this household though, where over 14 nights we have two nights with all seven of us together, seven nights where there’s just four of us, one where there are five of us and four where there are just two (ah…bliss).  It’s enough to make my usually quite organised brain spin wildly out of control on a good day, and on a bad one has the potential to cause abject chaos.   Plus, I must point out that the two adults in the house have the potential to act like children at any given time!

A serious aside though, we are acutely aware that actually there are five parents involved in parenting our five children in some way – when you include all biological parents and partners – you can see how it can all get messy and complicated with different approaches, expectations, house rules etc.

So we’ve had a few hiccups along the way, and we have learned A LOT, and I’m quite sure there’s a whole lot more of both coming our way.  But I thought long and hard about the bits to share with you, and frankly whilst the epic fails might make you laugh, they’re not really uplifting or encouraging and that’s really the point of what I do, so instead I thought I’d share some of my learning-highlights.

One of the big conversations I had with Andrew before we agreed to this whole crazy mega-house was that I would always do my very best to treat all of the children the same way.  By that I mean I would do all I could not to favour mine over his in any given situation, or jump in to bat for one of mine if I thought they had been wronged.

In part this is because of one of my big personal values which is all about fairness.  And in my mind fairness isn’t about  making sure everyone gets treated exactly the same – because, as I have pointed out to the children on more that one occasion, that would mean that the girls would currently be the proud owners of a new pair of Nike Superfly football boots – it’s more about being treated appropriately in relation to their very individual needs.

And when it comes to discipline, expectations and the general kind of ebb and flows of family-life it’s really that I would never exempt the Philpott’s (Andy’s kids) from something that the Terry’s (mine) have to do, or vice versa.  If I expect one of them to be able to set the table, or load the dishwasher, then that is applied to them all.

This leads beautifully and seamlessly into another of the hot topics in our household, which has really taken a little while to unpick and figure out how best to approach with them all, because in treating them all equally, there have been the inevitable squeals of, “well, we don’t have to do that at Mummy’s!” or, “at Daddy’s house we don’t have to have a bath before bed”.

After trying the whole, “Well that’s how it is in this house” once (epic fail) I had a bit of rethink about how best to tackle this objection.

Part of the issue related the very understandable sense of conflict some of the children felt when I would discuss something very much more openly than perhaps Andrew’s children would be used to at their Mummy’s house.  (Probably important to remember that the words ‘vagina’ and ‘vulva’ are fairly normal dinner table conversation topics with me around.)  Whilst I obviously try to be sensitive about this kind of thing, I also feel really strongly there shouldn’t ever be a sense of shame or awkwardness when discussing such topics [side note – see next week’s blog for more on this one!] and my children are fairly confident and comfortable in this space.

Anyway, one evening I was talking to Ruby about something and she had really eloquently addressed her sense of dis-ease about the situation and, after thanking her for telling me how she was feeling, I explained that just because me and her Mummy approached certain things (actually, probably lots of things) in VERY different ways, it didn’t necessarily mean that either one of us was either right or wrong.  I went on to say that in most situations there really isn’t a clear black and white solution or approach, but that in reality the world was made up of various shades of grey.  Now, whenever something arises that causes her to think twice about how we’re responding or tackling it, she just looks at me and says, “Shades of grey, Thea”.  Bless her.

I’m not your Mummy

Closely linked to this whole shades of grey thing came my need to clarify that I knew very well that I wasn’t their Mummy.  And almost more importantly I didn’t even want to be.  They already have a perfectly wonderful Mummy who does a brilliant job of bringing them up, caring for them etc.  I am Martha and Sebastian’s Mummy though.

And then it starting getting a bit tricky because Andrew and I aren’t married and I’m not their Step-Mummy either (awful job title incidentally) so then in my trying to figure out my own place in the #bradybunch world, what on earth was I?  What did they need me for?  How could be of best use and value to them given that in a lot of instances I did parent them…indeed, even ‘mother’ them.

So I did what I normally do, and I sat down and openly talked about it with them.  I tried to instill in them an understanding of the respect I hold for their precious relationship that they have with their Mummy, and that I have no need or desire to affect that in any way.   But, I did want them to know that I love them all very much and want to be there for them whenever they felt the need for a non-parent-parent’s perspective or input in a situation.  Also I explained that I know first hand how it feels because remember Martha and Sebastian’s Daddy has a girlfriend, that so I’ve had to figure this stuff out from the other side of the relationship coin.

And you know, it’s a bloody tricky balancing act a lot of the time, but I have come to recognise that I hold a really privileged position.  I’ve been privy to a host of in-depth questions and sharing of feelings and emotions that I don’t think their Mum or Dad have been because, well I’m not their Mummy.  I’m me and I have my own unique place.  And, for now anyway, that’s working out just fine.

This little beauty is my very own creation.  And I’m pretty proud of the problem solving creativity that went into this one, even if I do sound ever so slightly full of myself.

Going back that Facebook post in November, I was getting thoroughly swamped with all the extra housework and general effort that was necessary to keep #bradybunchtowers running smoothly, well, at least some of the time.  I decided to create a process called ‘peer reviews’ that kills two very precious birds with one brilliant stone.  It goes like this…

On a Sunday evening after we’ve had all the children home for the weekend I set the iPhone timer for about 15 minutes where everyone goes upstairs to tidy their bedrooms. The two big girls share, as do the boys, and Imogen gets her own room all to herself.

After 15 minutes they decide which of the other rooms they are going to review (this gets rotated each time) and they get another 15 minutes to create an iMovie presentation where they have to 1) explain all the positive elements in the room 2) any areas for improvement and 3) give a score out of 100.  When the time is up all seven of us meet in the lounge room and they present their videos to the rest of the family.

They LOVE it!  And they are incredibly creative – we have music backing tracks, big-reveals, and even the ‘gift’ (maybe bribery?) of easter eggs left for the judges over the easter weekend.  They also get feedback from me and Andrew about the quality of their presentations!  Oh, and of course they have to listen respectfully and not argue the points…it’s all about learning to accept (constructive) feedback and learn some awesome skills along the way.  AND, of course I get tidy bedrooms!

If I’ve done this right you should get a look at one of their video’s HERE.

Please trust me when I say these moments of brilliance are small and fleeting compared to the numerous times I’ve got it wrong, been frustrated and found our home such a noisy mountain of crazy that I would happily live as a hermit for all of about 15 minutes, before I remember how much joy I get from us all being together, albeit haphazardly.

Above all, this whole Brady Bunch life has taught me the importance of quality, regular, open, communication, and of course being able to say sorry and ask for forgiveness for all the times that it doesn’t quite work out the way that it did in the TV show!