It’s easier for me to think about the sort of therapist I don’t want to be, rather than the sort that I do. Growing up with a rather bleak view of mental health professionals due to many forced family counselling sessions to address my delinquent/concerning teenage behaviour, I reached adulthood with the opinion that ‘seeing someone’ was either a punishment or a last resort – basically something you did when everyone else had given up or stopped listening. I found the counsellors and psychologists that I was dragged along to in my youth patronising, and their ‘strategies’ simplistic and irrelevant – as if they were following a mandatory flow chart (self-harm = mindfulness strategies). There never really seemed to be any discussion around values or resilience or ME as a person, and I’d always end up feeling like there was something wrong with me that needed to be fixed, and it required my family ganging up on me with a team of experts to do so.

Consequently, I didn’t revisit therapy until I was in my early thirties, strongly encouraged by a close friend who was at the point of becoming the person who had given up (for good reason) listening to my toxic and self-flagellating see-saw of shitty relationships and associated woes. When I finally dragged myself along to see my first therapist in 20 years armed with my mental health care plan, I was a tightly wound ball of anxiety and despair, and no amount of “Mmmmm” and “that would have been VERY hard” could unwind me. My first attempts to find a therapist were unsuccessful, as I found the experience very similar to what I had encountered in my youth, minus my parents. Every conversation felt forced and sterile and my ‘problems’ were ‘explained’ by weirdly irrelevant events such as puberty (I’m 35) and daylight savings (it wasn’t). Again, I felt like a box at the end of a flow chart (risk assessment = moderate).

The whole finding-a-therapist thing was ironically making me feel more anxious and depressed than I had felt in the first place. Then I found The One – Ash.

He was just bloody fantastic. He didn’t make me feel like I was weird or wrong or that anything I did or thought needed to be fixed. (I now know this to be called ‘unconditional positive regard’, which turns out to be more of a skill that you’d think.) I didn’t feel that he was trying to change me or make me feel that there was something not OK about me, and this belief in my OK-ness made me realise that I already possessed the strength and skills necessary to navigate my way out of whatever shitty hole I had dug myself. He didn’t feel sorry for me, mansplain to me, or talk about irrelevant biological factors. He just got me. 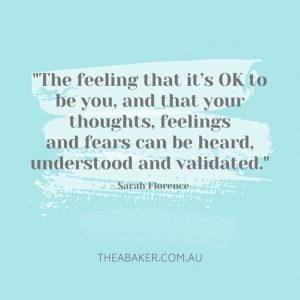 “Everyone just wants to be got”, said Thea in one of our first ever conversation, and that’s what I reckon it comes down to really. The feeling that it’s OK to be you, and that your thoughts, feelings and fears can be heard, understood and validated – this is the way that Ash made me feel. It’s OK to be weird, it’s OK to be you, and talking to someone who understands that is a life changing experience.

As a brand-new counsellor, I’m not yet sure where my specific mental health interests lie and literally feel like I’m in the confectionery section of Cole’s trying to choose between Clinkers and a block of Cadbury Marvellous Creations (the jelly one). What I do know for certain though is how I want to make people feel, and that’s that it’s OK to be them, and, even if it’s just for that one hour a week, they feel ‘got’. My advice for anyone out there looking to invest in their mental health is simple – find someone that gets you.