Things could be better – Lockdown 4.0

As children, my brother and I were big Calvin and Hobbes fans. The comic series, both written and illustrated by Bill Watterson, features the adventures of a little kid, Calvin, and his stuffed toy tiger, Hobbes. It’s debatable (according to Google) whether Hobbes is actually ‘real’, or whether the escapades of the two are predominately a result of Calvin’s active imagination. Regardless, they’re hilarious, timeless, and relevant.

My entire family (Mum, Dad and younger brother) were well immersed in Calvin and Hobbes literature and would often quote various lines or episodes to each other when appropriate – because, whilst enjoyable and amusing on a surface level, there was always some kind of deeper meaning that would relate to life’s various challenges as they arose. As kids, these challenges would be things much like the featured illustration – not having a big enough piece of pie, getting too much homework, or getting an undesired Kinder surprise toy (when you’re trying to collect a set, this is a big fucking deal). In these situations, my parents would lecture us that ‘life could be worse’ which is a pretty standard response to whining kids. 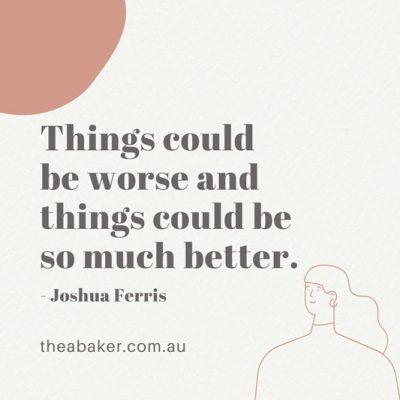 As a Victorian here in (hopefully) the middle of our fourth lockdown, I can vehemently say that life could be a whole lot fucking better right now, and that is a completely legitimate and acceptable response to the situation. I’m allowed to be bummed that my trip to NZ got canned due to restrictions, when I haven’t seen my family since 2019. I’m allowed to be stressed and upset over my financial situation and feel angry and hard done by that myself and other small business owners aren’t eligible for relief grants. I’m allowed to be anxious, mad and resentful. So are you, and that is really the bottom line here. There’s a LOT of reasons why lockdown is hard, and why this ‘surprise’ number four in the series is harder. Putting financial issues aside, there’s the undeniable ‘here we fucking go again’ factor, which brings with it a dark and by now familiar cloud of uncertainty. Life and relationships become strained as we struggle to adjust (again) to life without it’s necessary social and physical outlets, whilst feeling as though we’re not allowed to be upset or annoyed or indignant, because, as we keep being told, THINGS COULD BE WORSE.

As a counsellor, one of the most important parts of my job is to hear and to validate my clients and how they feel. Yes there’s a bunch of techniques we use (which I’m vaguely familiar with), but mainly it’s listening. If I told one of my clients that ‘things would be worse’, or compared whatever was happening with them to some random and irrelevant situation, they would likely not be coming back, and, given the state of my COVID-affected bank balance, I really bloody need them to right now. It can be awkward and uncomfortable to listen to a friend or family member being upset about stuff that maybe you wouldn’t be, but hey, those feelings are just as valid and important as the happy ones, and, as with most polarising elements, we can’t have one without the other. As I’ve talked about previously, there is no ‘fine all the time’, so let’s all just accept that and try and comfort those who aren’t coping, rather than telling them that they should be, because others have it tougher.

So…what SHOULD you say? Well, asking someone how they are doing, and actually listening to their response is a good start. Not telling them how they should feel or that they should be grateful, and by doing so minimising their thoughts and feelings is even better. Asking if there’s something practical you could do that may help them and their situation, and not assuming that you know what’s going on for them and what would help. Not everyone needs a pep talk or ‘perspective’. Sometimes we just want to be shitty, and indignant, and pissed off that, over a year later, we seem to be in the exact same situation again. Sometimes we just want someone to hear that and to acknowledge, that yes, things could be a lot fucking better. We absolutely will get through this as a community, (by going for copious walks and listening to playlists that include ‘Here Comes the Sun’)  but to do that we need to be real about what’s going on for us and for others and how it’s making us feel. We’ve fucking got this Victoria, but we’re allowed to be a little bit bloody angry about it.