Skip to content
‘The Three C’s’ – my take on choices, chances, changes

I wrote a blog for the mishfit website a little over two years ago in amongst the messy grief following Charles’ death.  (You can read it HERE if you don’t know that whole story.)  Reading it back now it feels very much like I was laying my grief out there for all to read and somehow hoping that in the process I would be able to figure out what the hell had just happened.

If writing is your jam, then there’s a lot to be said for that approach to working through some major life shit.

But that’s not at all the point of this blog.  And I only bring up that blog, and my reflections at the time, because that utterly dreadful experience has given me an insight into how our choices, and the chances that the take, or indeed pass up, can have a literally life-changing effect our lives. 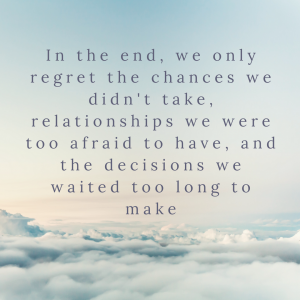 Regrets, I’ve had a few

I hope I’m not alone in the frank admission I’m about to make.

But hand on heart, I have more than a few regrets in my life.  Some of them haven’t kept me awake at night, but there are a few that if I could go back and live my life over I would make difference choices.  Or at least I’d like to think that I would.

Like making the choice to leave my boarding school at 16 in order to move back home for the final two years of secondary education.  I’m pretty certain that had I stayed at my all-girl’s boarding school, with it’s focus on the academic, I would have done better in my final year exams.  Instead I opted for a mixed sixth form college with all the distractions that testosterone brings.  Hmmm…leaving that story right there, but who knows where I’d be now if I had made a different choice back then. 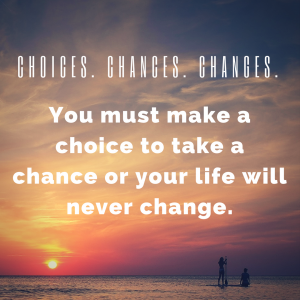 Choices, chances and changes.  There are a lot of people that say that life comes down to the balancing act of these three things.  Personally I see it as something of a messy mathematical equation.  Messy because it’s not a simple formula that if you follow it perfectly you’re guaranteed the right answer at the end.

By following one path you are, by direct extension, turning down a whole bunch of alternative paths.  When we say ‘yes’ to one thing, we are often saying ‘no’ to many more.

I look at this part of the equation in two distinct ways.

Firstly there are the elements of life that we have enough control over that enable us to make choices.  When I’m working with my coaching clients I often encourage them to think about the vast number of choices we have the opportunity to make on a daily basis.

To lie in or set the alarm an hour earlier to exercise, meditate or get an hour of work in before the rest of the house wakes up and demands your attention.  Choose the bircher muesli or the pancakes, the eggs or the smashed avo.  Coffee or tea, TV and chocolate or a session in the gym.

Often our choices aren’t quite that black and white actually.  Sometimes we know that getting up early to have a workout would make us feel great, but at the same time we’re so  sleep deprived and strung out and know the extra hour of sleep would also do us the world of good.  My mantra for all these things is strikingly simple:

Will my choice take me towards or away from my vision?

When you don’t know which way to go I always find that question is a really great place to start.  Many of these choices at face value appear very small, however cumulatively their effect is significant.

The other side of the ‘choices equation’ is when life does that thing it does from time to time where you don’t get to make the choice.  Like when your husband dies suddenly.  When you’re winded by life and you’re left reeling because what’s happened to you, wasn’t at all what you would choose. 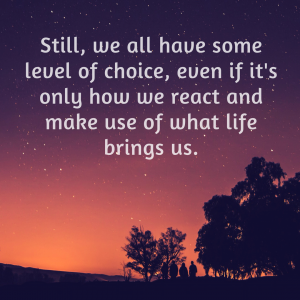 As I wrote back in that mishfit blog, I didn’t realise it at the time but I was enacting my choice throughout that dark and oh-so-messy time.  I chose how to react to the grief, the loss and the utter horridness that is seeing someone die and the hole that is left in your life after they have left this earth.

My motivation for writing this blog this week is, as ever, drawn from my life.  Last week I chose to travel half way across the world to surprise my Daddy for his 70th birthday.  Back in February when my brother first suggested this crazy idea to me, it wasn’t an easy choice to make.  Andrew had been made redundant a matter of weeks earlier and money was very tight.  Our future was looking scattered and scary.  It was a decision that took a few weeks to rationalise and commit to.

But my tipping point came when I considered how many opportunities I would have to be able to bring such joy to my family, and my Dad in particular.  Sometimes the universe hands you a chance…and it is entirely up to you whether you chose to take it. 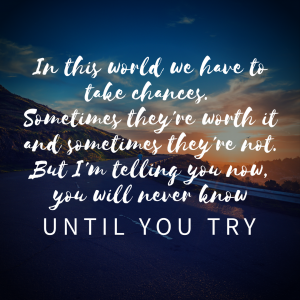 See how complicated this equation can get?

In another blog I wrote about what I consider ‘my fearless life‘.  It’s about how I have chosen to take another chance on love despite my fears.  My fears around rejection and loss, about the utter fragility of life and the lack of certainty that comes with sharing your life with another.

It’s about a year since I wrote that blog.  Since then we’ve moved in together and set up what I affectionately call #bradybunchtowers and I still feel like I’ve taken a huge chance on love.  There’s still no guarantees.  Still no safety-net for my heart.  But I know that whatever the future holds, I wouldn’t have missed out on all the joy I’ve experienced in the last nearly two and a half years for anything.

It’s funny how pretty much all I know comes down to just one thing.  Change.  If there’s one thing I would consider myself some kind of expert or guru of it would be change.

From the youngest age – 10 – when within the space of one month my family had moved from the tiny Caribbean island of Grand Cayman, where I was born, back to England and then I started boarding school.  Within 30 days everything I knew about life was different.  Even the most significant people in it.

From that day on I have known change in all it’s forms.   Moving schools, going to University, leaving home (which I only really lived in properly for two years after I turned 10), getting engaged and then un-engaged.  Partners, husband(s), children.  Love, birth, death and grief.  Life is always changing.  Whether it’s change you instigate and have longed to create, or change that is foisted on you, the way I see it you better get good at handling change. 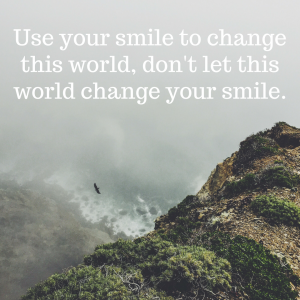 For some time I’ve thought of myself as a teacher.  Not in the traditional sense obviously, but in terms of imparting wisdom or knowledge it’s pretty much what I do.  Until recently.  The more time I spend working with women – in helping them create change either for their physical selves as a Trainer or for their psychological and spiritual selves as a Coach and Counsellor, the more I see myself as some kind of ‘change assistant’.

Maybe it’s that I teach women the steps to curate change in their lives.

I know I do a lot of listening and a ask a ridiculous amounts of questions.  But the answers are always in there.  The women I work with just need a little bit of help finding the way to where their answers are.

Most of all I hope that I encourage women to live.  To live full and colourful lives.  To help them negotiate the chaos and create the lives they were called to live.

The past is just memories, the future purely imagination, all we really have is right now.  Life is for living.  Make choices.  Make mistakes.  Learn from them.  Move forwards, move on.  But live.

I am currently taking a limited number of new coaching clients.  If you are keen to curate change in your life but need some help finding your path, email me at hello@theabaker.com.au and tell me a little about yourself and your dreams.