How well do you know your own body?

In my experience, probably not as well as you think. 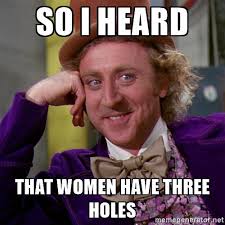 This third part of my mini-series focuses on you.  On us.  On women and all of the unique intricacies of our bodies, most specifically our genitalia and sexual reproductive organs.  And it’s not all part of some public service announcement, though that’s maybe a part of it.

I’ve worked with literally 100’s of women at various stages of their lives over the last six years and there have been a few interesting trends that I have observed.  Not all of the women I’ve trained have had children, though the majority have.  Some have come to see me while they’re pregnant, others just after they’ve had their babies and then others still at some point after that – my oldest client turns 80 this year!

It dawned on me a year or so ago that I was having some strange conversations with some of my clients about anatomy.  I have to get pretty detailed and into this stuff when I’m trying to help them understand how their core actually works (that it’s not just their 6-pack muscles) and how their pelvic floor fits in and is designed to function.  I was surprised by the number of times I was met with a fairly blank expression when I started talking about female anatomy.

So I went back to the drawing board – literally.  I decided that I would spend part of my first session with EVERY woman explaining their own anatomy to them.  And I make no excuses about it, I’d prefer to be preaching to the converted every now and then, rather than presume knowledge that isn’t there.  Every single time I explain that you have three holes.  And I explain what they’re for and how the deep core and pelvic floor muscles work around each of them.  Because knowledge is power right?  And it’s your body so surely it’s a good idea to know how it is supposed to work?

Flaps or minge,  labia or vagina?

Then there’s the whole issue of what we’re calling our anatomy.  While I’m doing this whole biology 101 bit during my session I’m very careful about using the correct medical terminology.  Partly because I think it’s important to be clear about which parts I’m talking about, plus I really believe that we’ve gone all a bit crazy with the language we use.  Maybe because we feel so awkward, that somehow it’s socially acceptable to say ‘penis’ but not ‘vulva’ or ‘vagina’.  So we call them va-ja-ja’s or lady gardens because somehow that’s less weird.  WTAF?

If we don’t know our own bodies and what to call our genitalia then how on earth do we expect the men in our world to?!  And whilst there are a lot of slang words to describe a vagina, very few of them are complimentary.  I think it’s time we change that.  And it starts with us ladies.  We need to reclaim our genitalia and the first step to doing that is knowing them and calling them. 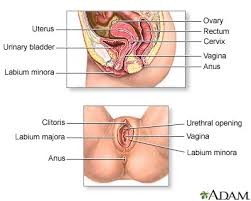 You’re not alone if you don’t know your vulva from your labia minora.  But can I (very politely and gently) suggest that you get a handle on that stuff?  And if you’ve got daughters I think it’s even more important – pass on that knowledge and wisdom, empower her.  (I’ve added some useful links at the bottom of this blog if you want to find out more.)

Here’s a fun fact for you – 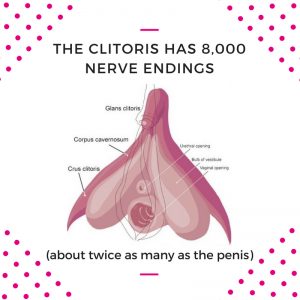 If you don’t know about your body, how it’s wired and why it’s wired that way then you’re missing out on a whole lot of good stuff!  It’s all there for far more than reproduction and functional form, and it’s pretty amazing when you get to know it in detail.

And whether it’s all functioning properly can have an impact on how much sexual pleasure you feel.  Did you know… 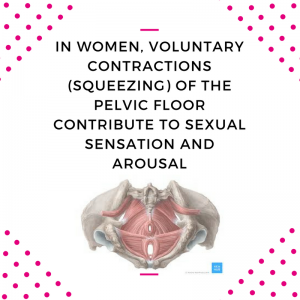 Now this might be a step too far.  It might be just a bit too much science, but have you ever heard of the pudendal nerve?

It’s a funky tree of a nerve (more like a system of nerves or if you’re a visual person think seaweed) that wraps itself around your three holes and in and out of your pelvic organs.  In men it’s not all that complicated, and doesn’t vary too much between different men.  Here’s the thing though.  Remember that third hole we have?  Well, the pudendal and pelvic nerve branches of women are firstly a whole lot more complicated (no surprises there).  They also vary quite a lot between women.

“I had never read that the way you best reached orgasm, as a woman, was largely due to basic neural wiring.” (1)

So if you have never had a clitoral orgasm, can only climax from oral stimulation or need to be in a particular position…there is a proper scientific reason for it.  It’s not that you’re weird, it’s just the way you’re wired!

I wouldn’t feel like I’d done my deep-dive justice if I didn’t mention that I think there’s something all a little messed up with this.  Here’s a scary fact – 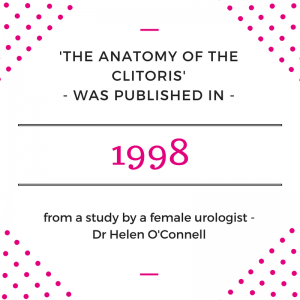 It’s only been during the last 20 years that female sexual pleasure became interesting to the medical community, and therefore worthy of research.  And the first 3-D sonography of the clitoris didn’t happen until 2008!  So that means back when I was going through puberty and trying to figure myself out, all this stuff wasn’t even known, at least scientifically.   Whereas when it comes to penises studies are published almost every year on the average length, girth and size, never mind how we all feel about it.  Their anatomy was figured out decades ago.

‘YOUR’ normal and YOU ARE normal

And this is where it maybe gets a bit PSA, but if you don’t know what your body is supposed to do, how do you know if it’s not doing it?  Again in my work at the Studio I encourage all of my clients who haven’t hit menopause yet, to become intimate with their intimate parts and to use some form of tracker to note down what is going on with their body.  It doesn’t matter if you’re not baby-making (trust me I’m not, remember part one of the series?) it’s still really useful to track your cycle and any other deviations from ‘your’ normal.  If you are peri-menopausal or have had issues either gynaecologically or with your menstrual cycle in general I would argue it’s even more important.  And for those using hormonal contraception it’s a good idea to help you be more mindful about what effects the contraceptives are having on your body.

You only have one body, it makes sense to be the best kind of custodian you can be of it, and to me, being mindful and aware of what it does and when is vital.  Then when it starts to do something different you know about it quickly and can see easily when things changed…and when you might need to get medical help.  I am a HUGE fan of the app Clue – it’s scientific and practical, not girly or naff (check out link below).

And speaking of normal, last year I wrote a blog about labia’s.  Actually, it was about the uniqueness of all of our genitalia, the rise of labiaplasty and the role of pornography and censorship.

I think that we have to own some of that.  If we, as women, don’t know our bodies, and own them for the amazing and unique creations that they all are, then aren’t we just perpetuating the nonsense?

In closing, it seems right to finish this little series of articles off with a quote from my blog last year –