I’ve had this one in me for a fair few months now.

It’s been going round and round, percolating if you like.  And I think it’s been particularly slow in the writing because it’s quite literally something that I’ve been really challenged by personally since all of the woo-ha last year.

That’s how I’ve come to think about it.

It doesn’t have the same negative emotion attached to it anymore, it doesn’t hurt me in that angry raw way that it once did.  I feel a comfortable normality about my life now – waking up alone most mornings (I only get a few nights a fortnight where I wake up with Andrew curled up around me – sometimes in my bed, though more often in his).  I do the school drop off and pick up with only me to rely on, I’m responsible for all the washing, ironing, cooking, cleaning and putting the bins out on a Wednesday night after my last clients of the day have finished in the Studio.

It’s all on me these days and that feels entirely normal.

Most of the time it’s just three of us at the dinner table, when the children are in bed (if I’m lucky by 8pm, but sometimes it’s closer to 8:30pm if I’m honest) the house is pretty quiet.  I can usually be found sitting at my desk, in front of my Mac writing or session planning with a glass of red wine for company.  And that’s been ok.  We found our groove, me and my babies and somewhere along the road that all became normal. 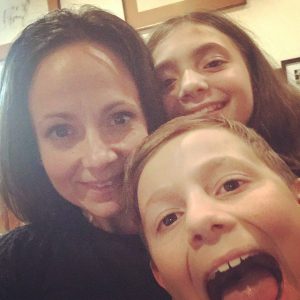 Back when Charles died a few of my friends were adamant that living and being on my own for a while would be “good for me”.  I think that they secretly thought I was going to struggle – I’ve been in committed relationships in one form or another for much of my adult life and everything that I’d been through with Charles – the control, and the emotional abuse – I think they genuinely felt I needed some time to heal and figure our exactly where my shit was at.

Well as it stands, we’ve been living alone for about 19 months and like I said, we’ve found our groove.  Except the universe kind of had other plans and I met Andy and his children and they became part of our world and things changed for us all.

When you’re two marriages down (in my case) and two engagements down (in his case) and collectively have five children life gets messy pretty quickly.  Our relationship progressed at a very tardy snail’s pace.  He was anxious about how recovered I was, what it would look like hooking up with the grieving widow and maybe he was genuinely worried about my ‘black widow’ status.  He also had some of his own stuff to figure out – what he really wanted probably didn’t include someone with quite so much baggage as I was travelling with!

I on the other hand, whilst usually so carefree with my heart had become incredibly afraid and almost reserved about getting into another relationship.  It was like some kind of messed up waltz – two steps forward and then I’d retreat into safety, disbelieving and anxious.  I was afraid to trust my sense of judgement, afraid of getting hurt and so very heart-weary.  I was tired of this relationship stuff and with five children at that time under 11, there was absolutely no way of falling headlong in love until I could have some form of guarantee that I wasn’t going to fuck this one up too. 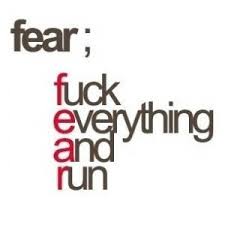 And right here is where I hit something of a stumbling block.  Yeah, I know there’s no such thing as a guarantee in love, right?  However hard I try, however perfect I might be, it might still not be enough.  At every turn I was seeking reassurances that were both unreasonable and impossible.  I had this constant refrain in my head, “I just can’t/don’t want to mess this up.  I just don’t want to get hurt again.  Sure I can cope alone – I can do ‘alone’ for the rest of my days quite comfortably, but I don’t think I want to go through anymore heartache.”

And there was some small part of me that said in a quiet, sad little voice, “Can’t I just be happy?  Don’t I deserve just a little bit of happiness?”

So the way I figured it, I had two choices – to run away and give up on this new relationship which I have nearly done on more than one occasion, or to get to grips with my crazy and sort it out.

I went with the latter and spent a lot of time breaking down my anxieties and I came to realise that, for a whole bunch of very understandable reasons I was operating from a place of fear.  My default place of safety was a castle of fear – with great big walls and a massive moat jam-packed with the most enormous sharks and crocodiles (probably the odd ferocious polar bear for good measure) and right at the centre, in the safest spot imaginable, was my heart. 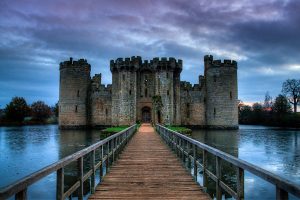 Now I learned that regardless of how amazingly secure my castle was – in fact I reckon it’s probably some kind of modern near impenetrable fortress – I still couldn’t control or manage my fear.  The fortress was never quite secure enough, regardless of how many walls I built or renovations I did.  I also learned that it quickly becomes pretty isolating trapped in my castle of fear, it limited any chance I had of truly being free of my past and it stopped me being able to live the life I was feeling drawn to be able to live…called to live.  As chaotic and messy as a future bang smack in the middle of a modern day version of The Brady Bunch appeared, there was this warmth and attraction to it that I am powerless to resist.

I became aware that by constantly focusing on all my fears I was only ever going to guarantee a focus on the bad stuff and the very feelings and outcomes I was so desperate to avoid.  Fear begets fear.  Negativity breeds negativity.  Fear stops you dead in your tracks and is addictively attractive, seductive in its isolation.  But entirely dumb.

And a waste of a life.

When Charles died I had a second chance at life.  (Okay, third chance)  Life is for living, by the seat of your pants living – stepping out of your castle, flinging open the drawbridge and embracing all that is waiting for you on the other side of the moat.  Come what may.

I have no idea how this is going to go.  I have absolutely no guarantees.  Only hopes and dreams and a sound belief in who I am, what I am and what I have learned.  From the beginning I have known that Andrew is a good man, with a kind heart and I am lucky to have found him sitting in my best friend’s house that night.

And as I frequently remind him…he’s bloody lucky to have found me too.

So when I am gripped by a moment of panic and doubt I spend some time refocusing my energy and remembering what I want – my bliss – rather than my fears.  Our home…with our own version of the Brady Bunch: Philpott-Baker-Terry style. 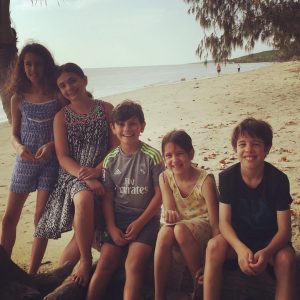 And I smile.  No more castles needed, defences are down.