I know a bit about training women

I have been a woman for close to thirty years (I’m arguing that my ‘womanhood’ kicked off at about 14 years old along with my periods).

And I have been working really closely with women’s bodies at all stages of womanhood as a Personal Trainer and a Coach, for getting close to seven of those years.

In that time I have trained women who are literally days pregnant, through to 40+ weeks pregnant.  Six weeks postpartum right through to 30+ years postpartum.  Women who are bang-smack in their child-bearing years to women who are fully post-menopausal.  They are all shapes and sizes, have a multitude of varying health issues, physical and emotional hang-ups, plus, of course, a totally unique set of needs and wants.

But the one thing that they have all had in common is that they are women.

I have worked REALLY hard to be a specialist at what I do and I’ve learned a thing or two along the way and so I’ve decided to spend a blog entirely dedicated to things that I wish you knew about working out as a woman, or indeed if you are a fitness professional, training women.

Women are not just mini-men

Anatomically and physiologically women are not the same as men.

We aren’t built the same way (see ‘three holes’, below).

We also have menstrual cycles for a really big chunk of our life, which affect our hormone levels.  And fluctuating hormones aren’t all about whether we’re in a bad mood or not. (see ‘periodisation for periods’, below).

Layered on top of that, we grow and evolve over a lifespan that is directly affected by our life-cycle of womanhood.  We go through puberty, sometimes into motherhood, via pregnancy, and then peri-menopause, menopause and post-menopause (see ‘cycles within cycles’, below). 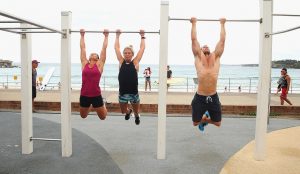 Just because women are different doesn’t mean that we can’t train hard.  It doesn’t mean we can’t lift weights or do unassisted pull-ups.  We just need to do it differently.

So, let’s look at the biggest differences, and how we need to take them into consideration when we are working out, or when we’re training other women.

This one is pretty obvious (hopefully) but you’d be surprised by how many women don’t know that they have three holes “down there”.

In case you were wondering, men only have two.

I was doing some video work a while back and instead of putting it all into words, I decided to share it with you.  It’s very rough, but I’m working on the concept of getting stuff out there even if it’s not quite perfect, so I know you’ll forgive me.  And anyway, it tells it exactly how it is.

Having three holes as opposed to two makes a huge difference from a training perspective because anatomically, along with the extra hole, comes a whole different structure to the base of our core.  We have this complex arrangement of pelvic floor muscles that need to be considered when lifting heavy load, working in wide stances, jumping and sometimes even when doing single leg work.  Considered, even if there isn’t any history of pelvic floor weakness, because we now know that inappropriate training choices alone are enough to cause prolapse of the pelvic floor organs – even in women who have never been pregnant.

And I really do mean ‘considered’.  I’m not saying it means women can’t lift heavy weights safely and without causing damage to their pelvic floor, I am saying that we need to look at that alongside a whole host of other things such as what this woman does for a living, whether she has had children, what her exercise goals and passions are and then make intelligent training selections with the extra anatomical awareness in mind.

So we have periods.  Big deal.

But did you know that it actually makes a huge difference from a training perspective?  Did you know that at different points in your cycle you are more likely to feel good lifting heavy weights, and in fact might find it easier and even lift heavier than you will at other times in your cycle?

During the child-bearing years, the female body is designed to, well, bear children.  And our hormones reflect it.  We have ebbs and flows of both oestrogen and progesterone – they help us get ready every month to possibly make a baby, but they also have other effects.

There’s a reason why you don’t feel like working out so hard after you’ve ovulated (technical term: luteal phase) and it’s because your body is wanting you to go easy incase you just started making a baby. 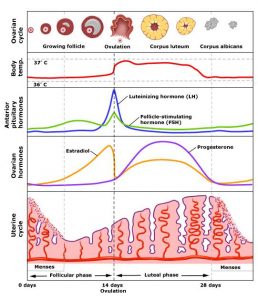 Likewise on the first few days of your cycle when you might feel like you’re bleeding to death and in pain, it’s also your body’s way of telling you to take it easy…maybe walk, stretch or do yoga if you really need to workout.  But really your body is pretty busy shedding your endometrial lining and it’s not so fussed about muscle gain at that point in your cycle.  (Read this great article if you want to fully get your geek on.)

There is a reason I ask women where they are in their cycle before I hit them with a big session.  If they tell me they’re about to start their period, I have a plan b.  I also encourage them to understand their own bodies in detail because although all the science in the world is great, we should also know our cycle’s own unique idiosyncrasies.

So we cycle every month, but we also have some very distinct cycles that we go through over our whole lives.  Again hormones play a huge part in this and we most definitely differ from men in this regard.

Regardless of whether or not we ever do the motherhood phase, all women will eventually go through the stages of peri-menopause, menopause and post-menopause.

There are a whole host of symptoms that you may or may not go through during this time, as every woman’s journey is different.  There are a few unavoidable elements of menopause however:

These three things alone have massive implications on the type of workouts that women should be doing during these distinct phases.  It is much harder for women to maintain their strength post-menopausally so you really want to maximise any gains before that time.  Before presuming that middle-aged women don’t or can’t lift weights it’s important to have this grounding – you need to know why your body is behaving the way it is and how to work with it, not against it.

Some other fun facts

I would be the very last person to ever claim that women can’t be as strong or capable as men.  This article isn’t about that.  It’s about emphasising our differences so that we can be working out in a way that works for us, not against us.

Most “exercise” has been designed by men on and for men’s bodies.  Even yoga and pilates, which is probably two of the most female-dominated sessions in any gym in Australia were created by men with male anatomy in mind.

This is where feminism has kind of gone a bit off the rails for me.  I don’t need to compete against men.  I’m not a man.  Personally, I don’t need to flip tyres or shake ropes because it doesn’t do anything special for my life that I can’t do in a more relevant way.

You see I exercise for my body.  For my needs.  And I do the same for my clients.

Want to know more – get in touch with me at: hello@theabaker.com.au or https://www.facebook.com/TheaBakerWellness/